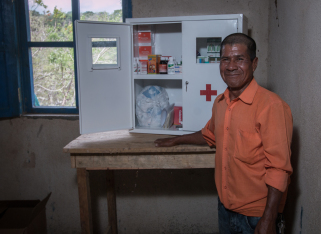 In order to develop permanent local access to basic health care, in 2016 and 2017, local volunteers called "brigadistas" were trained by professional health care providers to diagnose common illnesses and administer basic medications. Fourteen brigadistas in eight mountain villages received mini-pharmacies equipped with first aid materials and medications. Each month, our nurse resupplies the mini-pharmacies and meets with the brigadistas to discuss their cases and review their records. 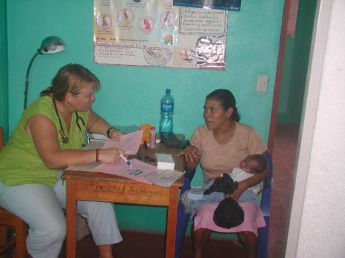 Traditionally, the centerpiece of our commitment has been the mobile clinic, which permits the population in the north of the country access to medical care far away from hospitals, clinics, or pharmacies. Now the mobile clinic travels through the region about twice a year, staffed by volunteer doctors from Germany and elsewhere in Europe. These doctors not only work without salary, they also pay their own travel expenses. Since 2018, they also finance the costs of the four-week clinic: 2,600 USD per month for medicines, laboratory costs, and patient transferrals, as well as the costs of the truck and salaries of the nurse and driver. 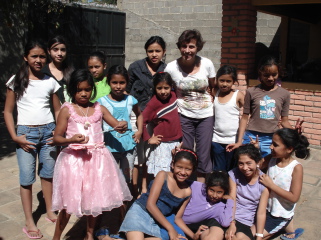 Nicaragua Project also supports the association MARIA de NAZARETH in Ocotal, which cares for girls from extremely poor problem families. The girls' backgrounds may include alcohol, drugs, prostitution and sexual abuse. Girls can spend the day at the shelter, receive meals, take showers, get help with their schoolwork and participate in creative activities. In critical situations, they may stay overnight. The shelter emphasizes the importance of education, organizes apprenticships, and offers university scholarships.

The NGO and Its History

Nicaragua Projekt is a non-profit association which supports medical and social projects in northern Nicaragua.

The commitment of Dr. Katrin Hennings, a pediatrician, and Reinhart Bein, a retired pilot, in the Ocotal region began in 2005, when they established a monthly mobile clinic on behalf of the organization German Doctors eV. Through this work, they got to know Dulce Maria Calderon and Viola Castillo and their project Maria de Nazareth, a Girls' Day Shelter established in 1999.

In 2006, Dr. Hennings and Mr. Bein joined other volunteer supporters to found the non-profit organization Nicaragua Projekt e.V. in order to support the Girls Day Shelter Maria de Nazareth and other social activities. Following the withdrawal of German Doctors e.V. in 2015, the mobile clinic was taken over by Nicaragua Projekt e.V.

The Founders and Supporters 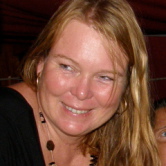 Dr. Katrin Hennings is a pediatrician and the medical director of Nicaragua Projekt e.V.

Before finishing her medical studies at the University of Hamburg she worked for five months in a mission hospital in Malawi in Southeast Africa.

She started her career as a doctor working in internal medicine and pediatrics in Scotland and moved back to Germany in 1988 to work in the “DRK Krankenhausl” in Bremerhaven. In 1993 she became a specialist in pediatrics and worked as consultant of the department of neonatology from 1995 to 2002.

Since 2002 Dr. Katrin Hennings has lived in Germany and Central America. She has supported medical projects in Panama and worked for the Red Cross in Haiti. In Nicaragua, she and her husband established a mobile clinic in 2005 on behalf of the organization German Doctors eV. Since then she has worked numerous times in Nicaragua as a doctor and as coordinator of the mobile clinic and a dental project for German Doctors e.V. For Nicaragua Projekt, she volunteers both as president of the association and in Ocotal as physician and project director. 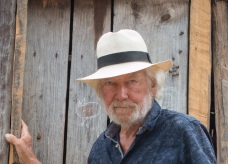 Reinhart Bein is a pilot and merchant marine captain and the organizational backbone of the Nicaragua project.

As a 14-year-old, he left home to become a sailor and at the age of 26 he became captain on a German ship transporting bananas from Ecuador to the States. In 1965 he began his career with Lufthansa, first as a navigator later as a pilot. Until his retirement in 1995, he flew as a captain on Boeing 747.

Since 1983 Reinhart Bein sailed as captain on the training ship Thor Heyerdahl and other traditional tall ships and as first officer on the Alexander von Humboldt.

Since 2006, as chairman of Nicaragua Projekt, he has used his wealth of experience to provide essential support for its ever-changing organizational challenges. Like his wife Katrin Hennings, he is also fascinated by South and Central America and is passionate about the people of Nicaragua. 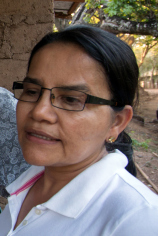 Dulce Maria Calderon is the founder and director of the girls project "Maria de Nazaret".

She was born ninth of 15 children and grew up in Ocotal in modest circumstances. After graduating from high school, she became a nurse. Due to a serious car accident which required more than two years of recovery, she gave up her desire to study medicine.

After studying business administration and working in the private sector, in 1995 she began studying theology and social sciences. From 1999 to 2001 she was a lecturer at the University of Esteli UCATSE.

In 1999, she and Viola Castillo began supporting young women and girls in need. At first, she worked directly in the prison of Ocotal, later she rented a house for her project. In 2007, with the founding of the "Asociacion Vida Nueva Catolica para la promocion Humana", she was able to purchase a house in Barrio Sandino for social work. In 2009, the Asociacion purchased a second house in the city centre of Ocotal.

Dulce Maria Calderon works exclusively on a voluntary basis and finances her project "Maria de Nazaret" through donations and profits from a small shop in the store front of the house in the center of Ocotal. 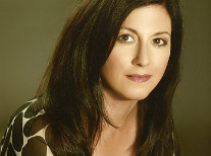 Jasmin Solfaghari was born in Freiburg im Breisgau and grew up in Tehran, Iran, and Freiburg. She completed her directing studies with Prof. Götz Friedrich in Hamburg. This was followed by positions as director at the Hamburg State Opera, Oberspielleiterin at the “Stadttheater Bremerhaven “ and Oberspielleiterin at “Deutsche Oper," Berlin. As a director, Jasmin Solfaghari stages a comprehensive repertoire from Baroque to Modern in Germany and abroad. She created the narrator figure LUNA, with which she brought “Figarostoller Tag, Der Ring in 100 Minuten, La Cenerentola und Der Freischütz für Kinder” very successfully on stage.

From 2004 to 2011, Jasmin Solfaghari was a professor at the Leipzig University of Music and Performing Arts, leading international master classes for singers, and giving multilingual lectures in Germany, Italy, Israel, the United States and Brazil. She is the author of the "Opera Guide for Beginners: German-Alemannic and German-Saxon", published in 2017 by Schott Verlag.

Jasmin Solfaghari is involved in various projects on a voluntary basis. She is member of the Artistic Directory of the "Festive Opera Gala of the German AIDS Foundation" at the Deutsche Oper Berlin. She is the jury chairman of the Richard Wagner Foundation's Young Talent Prize Leipzig. She is an essential patron of Nicaragua Projekt eV.